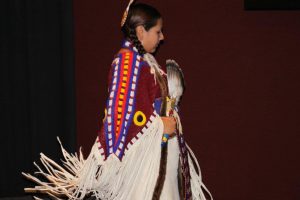 In this photo you see a side view of a young dancer performing the ladies traditional dance.

She has a fully beaded cape with buckskin fringe and also fully beaded leggings. Care to guess how much it weighs?? Well, try 65 pounds.

This dance demonstration was inside in an air conditioned room but you won’t find that at most traditional pow wows. The ones I have attended have all been outdoors in warm summer weather.

You can’t see it in this photo but on the upper back of the dancer’s cape there are two black feet. She also carries a fan made from the tail of a hawk.

As each dancer demonstrated the dance that fit with their clothing, the drum group was working hard to maintain their beat. After each dance, the announcer explained and pointed out significant parts on each dance outfit. I learned a lot!

This energetic young boy has won many competitions throughout the United States. I must have taken a dozen photos of him. Each time he turned I could see more of his unique dance outfit. 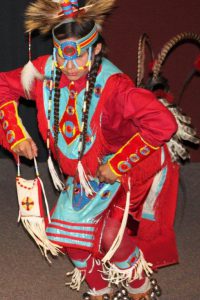 This is called the chicken dance after the sage grouse birds (prairie chickens) who do a courtship dance during mating season. It is a very animated dance and it didn’t take long to see why this boy had won so many competitions. He was awesome!

There was porcupine quilling on his shirt, bells on his ankles and a bird wing fan. His bustle was the most amazing. It was a feather bustle and had pheasant spikes.

The more I learned about the clothing worn for Native dancing, the more impressed I became.

We are in the middle of pow wow season. I just checked the calendar and Milk River Indian Days will be held on the Fort Belknap Indian Reservation (near Harlem, MT on US Hwy 2) the weekend of July 29-31. That is followed by the Rocky Boy pow wow August 5-7 between Havre and Box Elder. And finally, the Hays pow wow and rodeo will be on the Fort Belknap reservation at the rodeo grounds in the Hays/Lodgepole area.