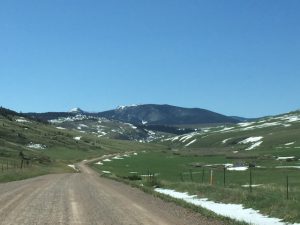 A few weeks ago, after a nice stretch of spring-like weather, I proudly picked up my snow shovel and marched it back to my garage. That snow shovel was put away for the summer and I wouldn’t even think about it until November.

Fast forward a couple of weeks and the words of my late grandmother echoed in my mind – you can’t tell the weather by looking at a calendar. Truer words have never been spoken!

A few days ago it had started raining, and it rained hard. Then the temps dropped, lower than what I thought they would. I lamented buying that beautiful outdoor planter that has now seen alternate locations – my front deck, my garage, snuggled close to my house under a large overhang. It is still living but it has done a lot of traveling since leaving the nursery.

Alas, I found myself wondering if the darn snow shovel was going to have to exit the garage and get used one more time this season.

I was lucky since things melted quickly but I live in town at an elevation of a little over 3,300 feet. 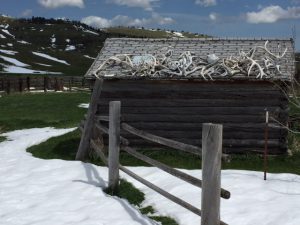 My travel plans for yesterday had me heading to Hughes Mountain Ranch southeast of Stanford, Montana in the Little Belt Mountains. I’ve been in this area several times and I know it can get some heavy spring snow.

The owner of Hughes Mountain Ranch emailed and said yes, there would be snow, but most of the gravel road was already bare so traveling should not be an issue.

As I turned off US Hwy 87 onto Running Wolf Road the view made me stop and get out of the car. Wow! There was a fair amount of snow on the ridgetops and in coulees but then there was also lots of green (very green) spring grass. The contrast between a freshly fallen very white snow against that green grass was awesome and out came my camera.

After awhile, many stops later for photos, my travel companion was probably wondering how long it would take to get to the ranch. It really isn’t far, probably about 15 miles after leaving the highway, but I was just dazzled by the colors. At one point there were bright yellow flowers blooming in the middle of a grassy pasture and glistening white snow in a nearby coulee. 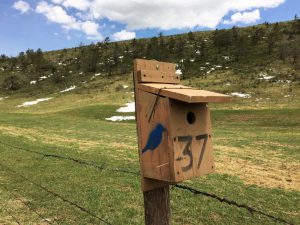 Another contrast I discovered – the gravel road was dry and we were kicking up dust but when I clambered into the ditch to get a different perspective for a photo, it was muddy, very muddy.

Running Wolf Road took us past two different turns for Dry Wolf Road, then we veered on to Sage Creek Trail. Bluebird boxes were mounted along the fencelines the entire 15 miles I traveled and I remembered that this is one of Central Montana’s birding routes – the Stanford Bluebird Trail.

Note to self: remember the binoculars.

Actually, if we would have had time, I think if we had just stopped the car by a bluebird box, shut off the engine and waited, we could have seen some going in and out of the bluebird boxes. We saw them flying around, just not any in the boxes.

It was a beautiful day and I was so glad I didn’t cancel the trip for a later date because of the spring snow. I took dozens of photos and I now have some great springtime memories of this route.

It’s well worth a drive for the scenery, the wildlife and the bluebirds.