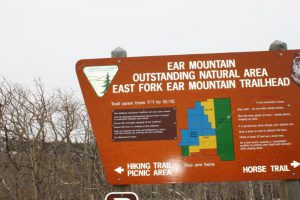 Last week as several of us were exploring Choteau, we decided to head west of town on the Teton Road (newly paved, very smooth!).

After almost 20 miles we crossed the Teton River and then started driving towards Teton canyon. Our first stop was at a BLM trailhead kiosk and rest area for hikers heading to Ear Mountain, one of the very visible mountains on the Front.

It was starting to snow – after a morning of pure sunshine. A little variety never hurts I suppose but I was chilly and didn’t get the best picture.

The road was muddy after getting snow a week prior. It had been icy earlier in the day but our morning sunshine had melted quite a bit of the snow.

Al Wiseman was riding with us and kept us interested by telling us great stories about growing up in this area.

We drove a few miles past the Ear Mountain trailhead, then stopped and walked over to a large boulder that is one of several in Teton County marking the Old North Trail. 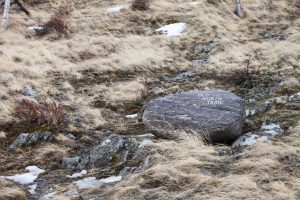 The Old North Trail is one of the oldest trails known to mankind. It once extended across the ice bridge from Siberia, then southward into Mexico some 25,000 years ago. In addition to the Metis using this trail, the Blackfeet used it for trade and travel from their northern hunting grounds to where they camped in the winter. Today it is probably used by game in the area to traverse the foothills of the Rocky Mountains.

My photo of the boulder marking the Old North Trail isn’t the best. In fact, it may just look like any old rock but, it is impressive when you learn the story.

If you were viewing the boulder in person, you would see small sandblasted words that say “Old North Trail”. It fits well with the landscape and you can see part of the Old North Trail going alongside the mountain.

We continued our drive in to Teton canyon. Everyone commented how quickly the terrain had changed. We went from a rolling, short grass plain to the dramatic mountains of what is commonly referred to as the Rocky Mountain Front or simply “The Front”.

Trailheads in this area access many hikes of varying degrees – from easy to oh dear, I think I need a rest! 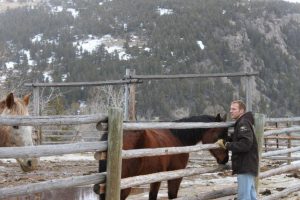 We arrived at Pine Butte Guest Ranch, owned by The Nature Conservancy. This was once the Circle 8 Ranch owned by the Gleasons and then it was sold to The Conservancy. They have continued to operate it as a guest ranch.

Scott Randall, guest ranch manager, met us and showed us their energy efficient office, one cabin and the barn and corrals. This contented horse was enjoying a chat with Scott, also a little scratch on the chin.

As this photo shows, the weather-man was trying to send some snow our way. It wasn’t accumulating but instead it gave some pretty qualities to my photos.

Pine Butte Guest Ranch is open from mid-May through mid-September. Their season begins with a couple of weeklong birding workshops led by noted author David Sibley.

Other workshops include one focused on photography and one to learn about the area’s grizzly bears and their habitat.

As I looked west and a bit north (I think) I saw a stunning rock formation which is named Indian Head. It’s a very noticeable formation from both the north and south sides.

This photo shows Indian Head in the background and a couple of the cabins at Pine Butte Guest Ranch.

Even though we had a little bit cooler weather and a few snow flakes it was still a beautiful day along the Rocky Mountain Front. I can’t wait for summer weather to get out and explore this area more.