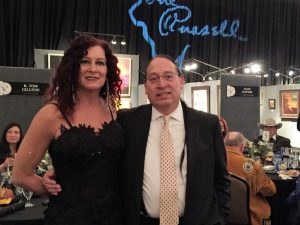 Their annual event consisted of three auctions starting with Art In Action Friday morning and early afternoon, then the First Strike Auction Friday night and ending with Saturday night’s The Russell: An Exhibition and Sale to Benefit the C. M. Russell Museum. That Saturday night event title is record-breaking in length!

Both evening auctions were located at The Mansfield Event Center in downtown Great Falls. Friday night’s event was a bit more casual but by Saturday night, boots were polished a little shinier, blue jeans were replaced by glitzy dresses and suits, and I saw some gals in stilleto heels that looked stunning but slightly uncomfortable!

There were 150 lots auctioned Saturday night. Some auctioneer’s voices tend to grate on me but this guy was good! He could engage the bidders and his spotters were lively and attentive to the crowd. 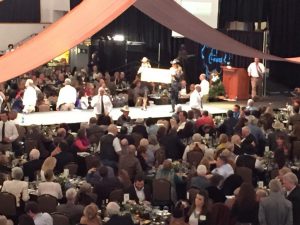 A Thomas Moran oil painting of Castle Rock, Green River, Wyoming was the talk of town preceding the auction. It was painted in 1907 and the sales range was estimated between $3.5 and 4.5 million dollars. That’s a lot of money! It sold for $3.6 million which is the highest amount ever paid at the Russell Auction.

Twelve C. M. Russell paintings were on the auction block. Two of them sold for $800,000 each – Indian With Bow (c. 1900) and Grizzly at Close Range (c. 1901). All twelve Russells were sold – a testimony that America’s Cowboy Artist can still generate a lot of interest with art collectors.

The Russell events are part of Western Art Week in Great Falls. At one of the art events I overheard someone say “why March”? About three people answered and said “the art events are typically the third weekend in March, the weekend nearest to Charlie Russell’s birthday”.

Congrats to the many volunteers and staff who worked to make this event a huge success – not only for the museum but for Great Falls and Central Montana.