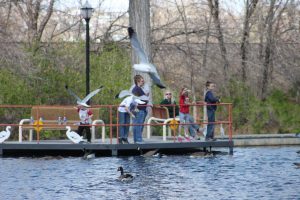 I know spring is here when Great Falls Park and Recreation announces their annual release of the ducks, geese and swans from the “Honker Hilton” to the pond at Gibson Park.

Last Friday afternoon a good sized crowd gathered around one end of the pond to wait for the trucks and trailers loaded with waterfowl to appear.

I was a running a bit behind schedule – I arrived before the city vehicles but I didn’t feel like I got the best spot for photos. Then, when I saw the excited looks on children’s faces who did get a better viewing spot, I decided it was better for them to be close and I’d still get some good photos.

Three swans were in the mix of feathered creatures – two white swans and one black one. They looked so regal! I love those birds.

A variety of ducks was also in the mix although I need my bird identification book to figure out what kind they were.

It didn’t take long for the ducks, geese and swans to get the hang of catching pieces of bread tossed in the water by many of the onlookers.

The waterfowl will stay in the pond at Gibson Park until fall. Then the Great Falls park and rec crew gathers them into trailers and takes them to their indoor digs locally called the Honker Hilton.

Kids and adults alike were having a grand time at Gibson last Friday. The weather was typical spring – a bit cool at times but the sun also warmed me.

Gibson Park, named after city founder Paris Gibson, is located in downtown Great Falls. It is a huge park and has a walking track around the perimeter, plenty of playground equipment, the Vinegar Jones cabin built by the earliest resident of Great Falls and a beautiful flower arbor which is a frequent site for weddings and photos during the summer. 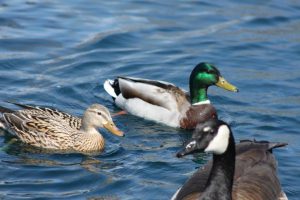 I’ll be spending plenty of time feeding the ducks, geese and swans this summer. My granddaughters love to go to Gibson Park, play on the playground equipment and then feed all of the resident waterfowl.

We should all be so grateful for the simpler things in life!