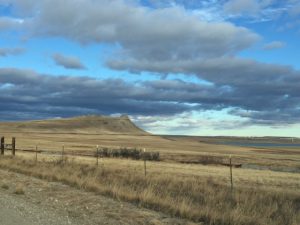 I’ve driven US Hwy 89 many times and each time I am between Fairfield and Choteau I pass by what is known as Priest Butte.

The terrain surrounding the butte is flat so it really stands out, even from a distance.

I was traveling north from Great Falls to Dupuyer the other day and had plenty of time so I turned west on Priest Butte Road, just before I got to the butte. It was a good gravel road that wove around the west side of Priest Butte.

The west side of Priest Butte seemed so different to me – cattle were grazing on a grass covered slope. The east side of the butte isn’t nearly such a gradual slope, more like a drop-off. Near the top of the butte I saw rocky shelving, almost like hoodoos. 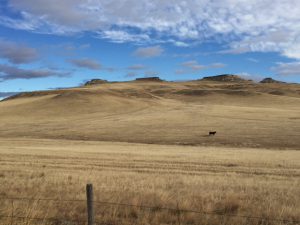 From the highway side of the butte I have seen three crosses on top but they seemed much more prominent when I saw them from the west side.

Priest Butte was named after a Jesuit Mission that was established further north to serve the Blackfoot Indian Reservation.

In 1893 there was a stone quarry on the butte and stone was cut there to build the Teton County Courthouse in Choteau. That courthouse burned in 1897 and a new one was built.

Priest Butte Lake is just east of the actual butte across the highway. Winds come off the Rocky Mountain Front and make some prime conditions on the lake for wind surfing and ice boating.

My drive around Priest Butte took probably an extra five or ten minutes…well…let’s make that 20 minutes because it was so unique and pretty I stopped to take quite a few photos.

“Driving for pleasure” is a category many of our visitors enjoy and I did too! Take some time to explore Central Montana’s off-the-beaten pathways.