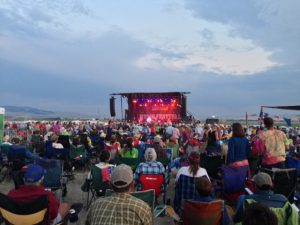 This past weekend was the Red Ants Pants Music Festival, a multi day fest held on a ranch just a couple miles out of White Sulphur Springs, Montana. Yes, it is held in a cow pasture!

Lots of phrases come to mind when I think about the festival – good music and attendees of all ages enjoying it, good brews and awesome foods, farm and ranch skills being demonstrated, and about the best scenic backdrop you could find.

Starting at the beginning – I wasn’t able to attend the entire festival. You know, job, life etc., all get in the way.

But the good times at this year’s Red Ants Pants Music Festival began last Thursday with a free street dance in downtown White Sulphur Springs. Camping at the festival site, which is on the Jackson Ranch, also opened Thursday night.

The music festival donates a portion of the profits to a Red Ants Pants Foundation whose mission is to develop and expand leadership roles for women, preserve and support working family farms and ranches, and to enrich and promote rural communities. Those ideals are woven throughout this amazing music festival. 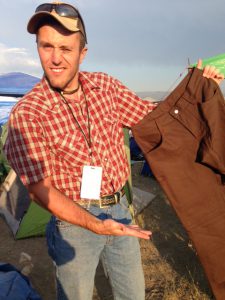 Friday’s line up filled two music stages, the Main Stage and Side Stage.

Remember that mission statement above? It played out too with a demo area showing how to mill grain with a bicycle sponsored by Prairie Heritage Farm.  Arts/crafts and food/beer/wine vendors opened Friday and two of the bands that I really wanted to see and hear, The Wailin’ Jennys and Corb Lund, performed. I did not get to hear them, bummer!

Saturday morning found an area Cattle Women’s group serving breakfast at the festival site – they know how to do brekkie! A hay wagon gave rides and there was yoga at 9am near the camping area. Two locals gals opened the music festival with the Star Spangled Banner at 11:55am and the day was off and running with music talent nonstop.

Thad demonstrated skills but he also answered a ton of questions. The crowd was definitely interested and his strawberry roan was definitely trained. 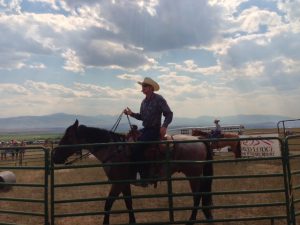 Two other demos on Saturday were From Steer to Steak meat processing and a Red Ants Pants Fashion Show on the Main Stage. The “models” were sure having a great time and the audience loved it.

Saturday’s musicians were absolutely, without a doubt, awesome. Most were groups that I was not familiar with. I listen to music but then I forget the group’s name. A few of Saturday’s musicians were The Drew Landry band, Todd Snider, Jessie Veeder and the Lonesome Willies and the grand finale musician Robert Earl Keen. I’ll be honest, I hadn’t heard of Robert Earl Keen but I must say, he’s my new favorite! What a feeling when that band hit the stage. You could feel the pulse of festival-goers rise a notch or two.

Sunday opened with another local group selling breakfast – the Meagher County Historical Society. It is so good to see everyone involved and it says a lot about the community.

You could do yoga again after breakfast, watch a crosscut saw contest or see a Montana beard and mustache competition. I saw a few beards who might win the ‘most unique” part of that judging! 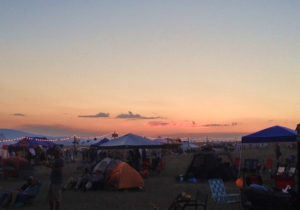 The festival closed out at 6:30pm Sunday after country music legend Merle Haggard wowed the crowd with vocals and instrumentals. Haggard was surely in his element – somewhere in the middle of Montana, just like his song says!

Good times, good people, good community – it just doesn’t get any better than this!

Did I mention I love Central Montana?