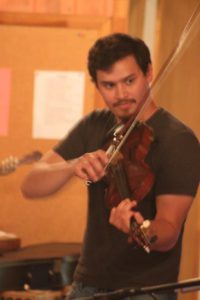 This is one of those – I wish I had realized how fun this event would be!

A couple of weeks ago I drove to the St. Thomas Camp near Monarch, Montana for the evening concert at the annual Montana Fiddle Camp. I had never been there and had no idea what to expect.

You would have a hard time missing this camp – huge banners were staked at both entrances to the area located on US Hwy 89. And there were cars, pickups, tents and campers galore.

I wasn’t sure where to go so I carefully walked through a group of campers and saw three older guys outside strumming guitars. OK, wasn’t this supposed to be fiddles?

I decided I had better ask them where the “open to the public” evening concert was being held because I couldn’t see anything. I soon was pointed in the direction of a small wooden building…one of those “you can’t miss it set of directions”. And, once I got there it was pretty obvious! The building where the concert was being held was almost full!

Folding chairs were lined up and I could see a few empty seats but I didn’t want to crawl over anyone with my camera gear. And, I wasn’t sure where I should sit to get the best photos in the least intrusive way.

I stood at the back for awhile, then carefully made my way to an empty seat on the far side.

The musicians playing were some of the instructors and I absolutely could have listened to them all night. Guitars, fiddles, mandolins, banjos, a bass and several vocalists all performed. 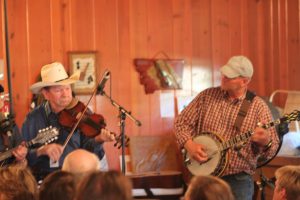 This was the 20th Annual Montana Fiddle Camp and there were a lot of students and their families in the audience. I noticed a quote on their schedule – Keeping fiddle spirit alive, Yesterday, Today and Tomorrow.

It was refreshing to see so many young kids learning to play instruments that aren’t as common as some.

There are several week-long camps where kids work in small groups with instructors. Each evening the instructors and students perform in concerts and dances.

A good time – I will be back next year!