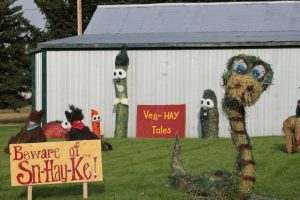 Each year I struggle to come up with something different for this incredibly unique event held between the communuties of Hobson, Utica and Windham. Then, I see what others have created for their entries and I think, darn, I could have done that!

The time for the Montana Bale Trail: What the Hay 2013 got closer and I was simply blank – no ideas!

The week prior to the event I worked on a 5 foot long and 1 foot high banner and put the words “Vac – HAY – tion info” on it.

As I spread the banner across a long kitchen island I thought I was very clever. It had orange letters with black borders on a white vinyl banner. Very nice, very bright, and clever to boot I thought.

Fast forward to the day of the bale decorating. I hung the banner across one round haybale. It looked a bit small and when I stepped off the ladder and back a few feet it really looked small. Note to self: think big!

The bales I painted said centralmontana.com and they followed the banner that said Vac – HAY – tion info so I hope people could understand what I was trying to say. If nothing else, they’d be able to easily read the writing on the haybales. 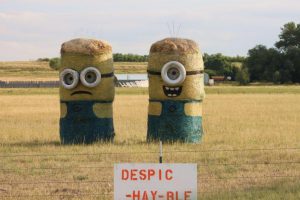 Other haybale artists were very clever. Snoop-Hay was a haybale doghouse with a sculpted dog and bird. The red dog house really stood out.

Next I saw Duck Dynast-hay. I haven’t seen that TV program but I’ve heard about it. There were two or three entries with the title relating to Duck Dynasty.

My favorite haybale was Wizard of Straws, a play on words for Wizard of Oz. There were characters sculpted from the Wizard of Oz story and an entire Emerald Cit-hay was created with a string of bales saying “follow the yellow hay road” connecting them. Many bales, many hours but it will probably win the big prize too! 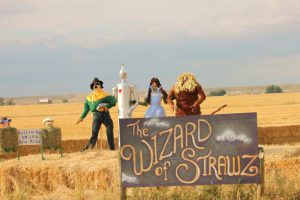 An addition to the What The Hay event a few years ago was a Hay-maze, very popular with kids and adults alike.

Food – oh yeah! There are several places to buy food at What The Hay – the Midway Caf-hay, the Utica Day Women’s Craft Fair, Oxen Yoke Bar and food is also available in Hobson.

If you missed this year’s event, many of the decorated bales will be up for a week or so. Take a leisurely drive on this 22 mile paved road between Windham and Hobson and enjoy the rural countryside and these fun bale creations.