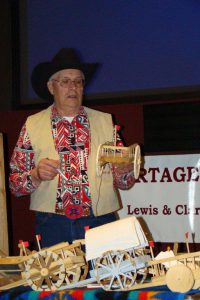 A week ago the Lewis & Clark Interpretive Center in Great Falls hosted Choteau area Metis Al Wiseman. This free afternoon session at the Center had 98 people attend and learn about Metis culture.

Metis are a mixed blood race dating back to when European fur trappers moved West. Many took Native American wives and their descendants developed a mixed culture – combining both European and Native American traditions.

The first time I met Al was on a hike to Antelope Butte on the Rocky Mountain Front several years ago. I signed up for the hike to get some exercise and see some new country. Al and his wife were both on the hike and I came home with a treasure of history – of the Metis, their customs, the land – and some wonderful humor passed along by Al.

Al has been instrumental in marking the Old North Trail along the Rocky Mountain Front. Huge boulders have been placed in certain accessible areas of the landscape and there is a small inscription on each boulder that says Old North Trail. 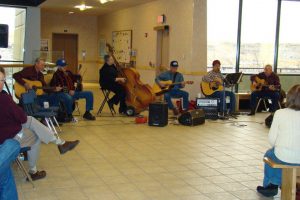 Al has made many replicas of the Red River carts used by Metis to transport their belongings. The Forest Service office in Choteau has a nice inside display and the Old Trail Museum in Choteau has a full-size replica cart in the grassy area in front of the museum complex.

A little trivia – the Metis frequently wore a red striped sash and you will also see pictures of Charlie Russell wearing a Metis sash.

After Al spoke, the Northern Rockies Music Association played for attendees. It was a great event.

The Lewis & Clark Interpretive Center begins a Winter Film Series starting today (Thursday January 19, showings at 4pm and 7pm) and there are many other events scheduled in the coming months.

During Janaury at the Center there are “fee free” Saturdays and Sundays so keep your wallet in your pocket and head out for an educational, entertaining and unique time. Call 406-727-8733 for details.