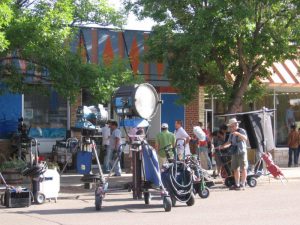 It’s been big news on Montana’s Hi-Line lately – filming of Winter in the Blood, based on a popular novel written by James Welch, has been ongoing.

Welch was born in Browning, MT and raised near the Blackfeet and Fort Belknap Indian Reservations. His mother was Gros Ventre, giving him ties to Fort Belknap, which is 40 miles east of Havre. Winter in the Blood was Welch’s first novel.

The Winter in the Blood storyline goes like this – Virgil First Raise goes on a wild and comic odyssey to find his renegade wife and – ultimately finds himself. Oh yeah, there are just a few skirmishes along the way!

There are so many great Montana ties to this project. Film directors (and brothers) Andrew and Alex Smith are Montana natives and their family knew James Welch’s family. The Smith brothers also directed The Slaughter Rule. One goal for Winter in the Blood is to have at least 80% Native American cast.

Back to filming – we always think of making movies as a fun and romantic business. Well, the temp in Havre yesterday was 99 degrees and today is looking to be toasty too. 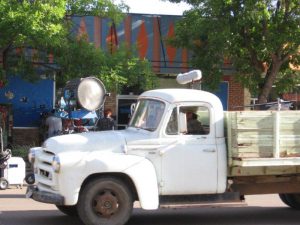 Havre, Chinook and Fort Belknap have all been excited to see this project come to fruition. A quick peruse of the cast directory shows locals from both Fort Belknap and Rocky Boy Indian Reservations.

A tip of the hat to Alex and Andrew Smith for not only boosting our local economy but for doing things right. It will be interesting to see the final movie once it comes out.