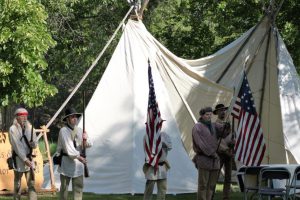 Each year members of the Portage Route Chapter of the Lewis & Clark Trail Heritage Foundation dress in period clothing at the Lewis & Clark Festival and demonstrate skills that would have been used in the early 1800s.

This annual festival is held in Gibson Park, downtown Great Falls, the third weekend of June each year.

The Portage Route Chapter is named after the arduous portage the Lewis & Clark Expedition did around the series of waterfalls near Great Falls.

That trek over ground covered with prickly pear, around the roaring falls, caused them huge delays and set the course for the next series of events where they almost perished crossing mountains in the winter.

The chapter presents the flags to open the festival, all dressed in period clothes. They fire black powder rifles, well some mis-fire, and then the festival begins.

This year I watched as they fired their rifles, then about 10 minutes later I heard several of the rifles go off again. Misfires they told me, and they needed to clear out the rifles! Those old rifles don’t always work. 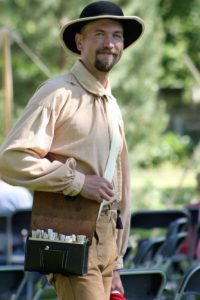 One of the members showed me his “spare bullets” which really was a case of wads of black powder that would be pushed into the rifle barrel.

If something was seriously chasing you, like the grizzly that chased Captain Lewis in the area now known as Great Falls, you’d learn to be quick at reloading those wads of powder.

This year there were also talks about the medicine used by the Corps of Discovery, how they fished for their food, what types of music they had (remember the fiddler) and how they set up camp each night.

A Bluegrass concert kicked off the festival this year and a luminaria walk along the River’s Edge Trail in Great Falls closed the activities on Saturday. 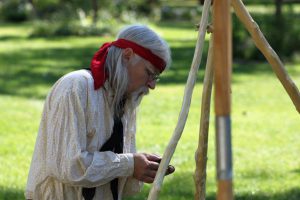 Sunday of the festival was set aside for a cruise on the Missouri River to the Gates of the Mountains. That included a motorcoach trip to the Gates entrance, a two hour boat cruise and a bison burger dinner at the marina.

The majority of the Lewis and Clark festival is free, (tickets were sold for the Bluegrass concert and river cruise), it is educational and it is fun for the entire family!

If you missed it this year, make a note on your calendar for the third weekend in June next year.