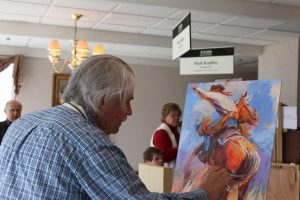 It all began with a celebration of Charlie Russell’s birthday which falls around the third weekend in March. An auction, art sale and birthday party were planned and it grew, and grew and grew!

Festivities this year kick off Wednesday, March 13 and several of the events keep going through Sunday, March 17.

A Silent Auction will be held at the Russell Museum, an Art In Action brunch is at the Meadowlark Country Club and The Russell Live Auction takes place Saturday, March 16 at the Best Western Heritage Inn.

This first photo was taken at last year’s Art In Action – a fun event where we mingled around the artists. I’m not an artist but I wouldn’t have been able to tune out the bustling atmosphere enough to paint! It was a very fun event. 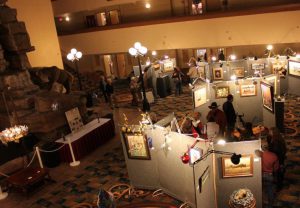 The Great Falls Holiday Inn hosts a show by the Western Heritage Artists, a multi-state organization of over 90 artists.

Bronzes, oils, pastels, watercolors and unique photographs will tempt buyers as they wander through open hotel rooms filled to the brim with art. There is no charge to attend this show. This photo is a scene from last year’s lobby show at the Holiday Inn where attendees could vote for the People’s Choice award given to participating artists.

The Great Western Living and Design Show is new this year. It will be held at the exhibition hall at Montana Expo Park and will feature all types of art from a painting to hang on your wall to wearable art and furniture.

Another group of artists called the Western Masters will set up at the Best Western Heritage Inn in 109 of the hotel rooms. Work by over 140 artists will be presented. This show is also free to the public and you can wander in an out of artists’ rooms and view their art for sale.

This photo shows local artist Steve Oiestad visiting with future customers in his art room at the BW Heritage Inn.

Make your plans now for this bustling week of art in Great Falls!