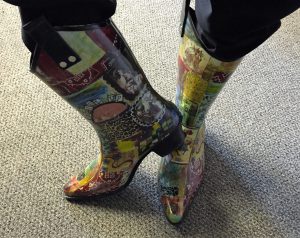 As one of our large art events approached last March I remembered that attendees typically dress western. As one observer said, Montana casual covers just about any kind of attire but I did notice a lot of cowboy boots at the event.

In fact, there were so many, especially on women, that I began to take photos of them. Some were plain, some were out-of-this-world in design and style.

Before I snapped any photos I asked permission from the boot-wearers. Everyone seemed flattered to have a photo shoot of their bootsl I bet those boots don’t get worn very often and this event was a sure-thing for wearing that kind of footwear.

After taking a photo of older lady’s boots she started to tell me that she knew some of the history of cowboy boots. I was fascinated and, even though she didn’t know all the details, she steered my to an amazing website.

The story goes…the first cowboy bootmaker in the United States was the Hyer Boot Company and they began in humble surroundings in 1875. Yes, 1875! Hyer was described at one time as being the largest manufacturer of handmade boots. 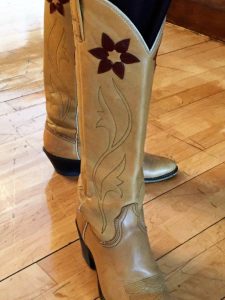 Their key to notoriety was developing a measurement chart that they would send out with their flyers. In today’s lingo that is called gorilla marketing! Since society was not as mobile as we are today, prospective customers could take their foot measurements and order custom made boots without having days of travel to the manufacturer.

By 1900, Hyer Boot Company went from 2 employees to 15. During World War I, the Hyers made boots for the officers at Fort Leavenworth. By the 1960s they had more than 70 employees and their clientele was worldwide.

Boots were available in a variety of styles, heel heights, leathers and decorations. Simple stitchery, diamond insets and gold and silver inlays were all available so they definitely appealed to a broad range of customers.

The Hyers are credited as one of the first to invent cowboy boots. They mostly employed German immigrants, also some from Sweden and Poland. 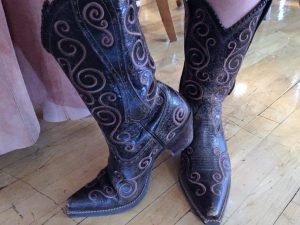 Today, visitors can learn their cowboy boot history at the Kansas Museum of History at the display titled “Hyer Boots, home of the Cowboy Boot”.

Well, I was fascinated with all of the information my most recent cowboy boot model had. She told me she used to be a docent at the C. M. Russell Museum, she loved history and she looked great in her boots! I couldn’t wait to get back and research the story.

For the next western event you attend in Central Montana, dust off your cowboy boots and wear them proudly!

2 thoughts on “It’s A Cowboy Boot Kind of Day”