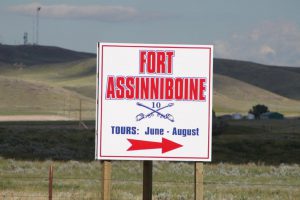 Fort Assinniboine is located about six miles from Havre on US Hwy 87. Ask a few Montanans if they know about it and you would probably get a mix of comments.

The fort sits just a bit off the highway and if you aren’t watching for it you could easily pass it by – until now. Supporters of Fort Assinniboine have recently put up a new, brightly colored sign directing folks where to turn.

I’ve been fortunate to tour Fort Assinniboine several times. And, there is so much history there I learn something new each time!

The fort was constructed from 1877 – 1879. The United States Army had taken many losses during the Battle of the Little Big Horn in eastern Montana (remember General Custer?).

Several Indian tribes used routes that intersected near the area of Fort Assinniboine so this fort was strategically located to ward off any issues with them. 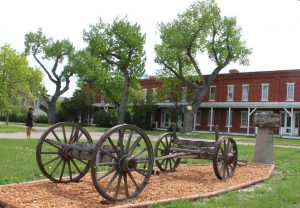 At first glance it didn’t look like any frontier forts I have toured. No perimeter fence surrounds the fort and I always thought that was standard. The remaining buildings (originally over 100, now about a dozen) are all brick construction.

Wives and families accompanied officers stationed at Fort Assinniboine so there is a social hall where our tour guide said there would have been dances and other social events.

I think the remaining buildings look very regal. A brick tower stands at the end of a row of living quarters (today we would call them attached homes or condos!). Large windows, all trimmed in white, doorways with sidelight windows and a boardwalk line the living quarters. Pretty fancy digs for the late 1800’s and you can see why this fort was dubbed “a grand military post”.

John J. Pershing, aka Black Jack Pershing, had an early assignment at Fort Assinniboine, long before he became the highest ranking officer in the US military. At MSU Northern’s campus in Havre one of the campus buildings is named Pershing Hall after Black Jack. 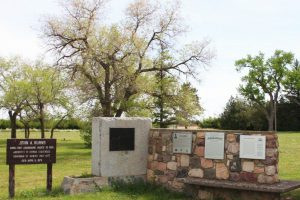 During Fort Assinniboine’s operation there were two units of the 10th Cavalry stationed there. A large contingent of Buffalo Soldiers were also at the fort, something new to this part of the United States. Indians gave them the name “buffalo soldiers” after comparing them to plains buffalo (bison) because their fighting abilities reminded them of the mightly sacred buffalo.

Fort Assinniboine closed in 1911. Part of the fort land was given to Rocky Boy Indian Reservation whose land adjoined it. Another portion of the land was given to Hill County to create the county-operated and owned Beaver Creek Park.

As you take the turn in to the fort today you see a sign for MSU Extension’s agriculture experiment station. They use part of the old fort buildings and land to test varieties of crops that could be introduced to area farmers.

All tours of Fort Assinniboine are guided and there is a docent stationed there during the summer seven days a week (Monday – Friday from 9am to 5pm; Saturday and Sunday from noon to 5pm). A small fee is charged for the tours – well worth it!