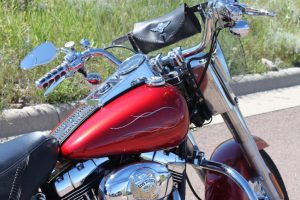 Wow – what a fun weekend for motorcycle afficionados!

I don’t own a bike but it sure was fun looking at the multitude as they came to Great Falls for the 2013 Montana State Harley Rally.

Local event organizers planned a parade down Central Avenue in Great Falls, a downtown concert which was combined with a weekly Alive @ 5 event, and a poker ride/scavenger hunt that took attendees out and about to about six different geographic areas.

I was able to watch both the parade downtown and parts of the poker ride.

About 200 motorcycles paraded downtown – what fun! And they were all wearing smiles.

I spoke with several bikers at the Lewis & Clark Interpretive Center, one of the stops on the poker ride. I asked if they were having fun and one response was – any day on a bike is a fun time. 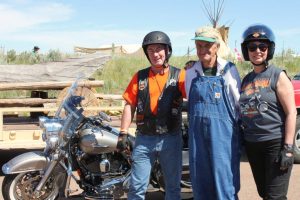 Although it was billed as a Montana state gathering I spoke with bikers from Idaho, North Dakota and Alberta.

I visited with this biker couple from Calgary. They had been chatting with this older gentleman and I really wanted to get the scoop – was he a former biker, did he own a bike, did he want to go for a ride? Well, it wasn’t my business to ask although I did request that they pose together.

The rally had several rides in different directions – some went to Fort Benton, some to the Gates of the Mountains – all in an effort to explore Central Montana.

We had fun watching them over the weekend and I suspect they had a great time too.