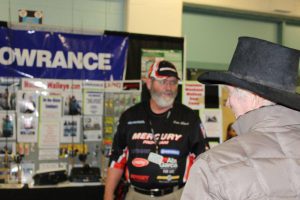 Last weekend I attended the Great Rockies Sport Show at the Four Seasons Arena in Great Falls, MT. They had over 60 exhibitors and a great crowd on Saturday when I was there.

The three day show had speakers, a huge wall mount display of animals that had been mounted by a taxidermist, live animals (think grizzly bear), a trout pond for kids, a great photo display by the Outdoor Writers Association of America and a Heads and Horns competition.

One of the first booths I stopped at was one promoting walleye fishing. Dale Gilbert, a local Montana Walleye Pro, was staffing the booth. Dale and I connected after Russell Country had worked to promote walleye fishing at some lesser known lakes and reservoirs in north central Montana (Tiber, Lake Frances, Fresno, Beaver Creek and the Missouri River). Dale gives seminars on walleye fishing and is currently planning one for the Hell Creek area of Fort Peck Lake. He’s a wealth of information about fishing, walleye in particular, and his enthusiasm was amazing. 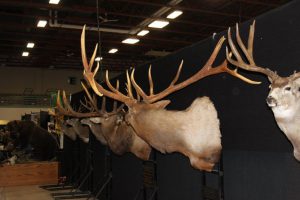 The display of animals mounted on one long aisle walkway was very impressive. I saw several people taking photos, looking closely at the taxidermy work and enjoying the up-close glimpse of the display. Most were animals you would see in Montana but there were a few I didn’t even recognize.

Just around the corner from the wall of mounted heads was Tonk, a live Alaskan grizzly bear. This 5 year old 500 pound grizzly looked just like a big teddy bear to me. There were lots of people watching Tonk who was busy playing with a ball and not even paying attention to the crowd. He actually lives in Florida and travels around to shows like this in the winter.

I saw booths from several hunting lodges and outfitters from Canada, a few vendors that sold accessory-type equipment like hunting knives, rafting gear, RVs – wow, you could plan more than one year’s worth of outings at this show. 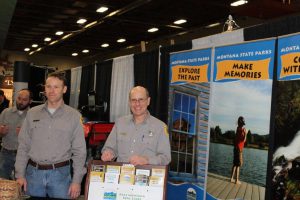 Public lands agencies were also represented. I saw booths from the US Forest Service, BLM and Fish, Wildlife and Parks. Matt Marcinek, Giant Springs State Park and Jake McCoy from First People’s Buffalo Jump State Park had a fairly steady stream of visitors to their booth but I managed to get them to pose for one photo. And, I snagged a great brochure promoting all of Montana’s state parks.

The Great Rockies Sport Show is usually scheduled each February. Watch for it next year and make plans to attend. You won’t be disappointed.