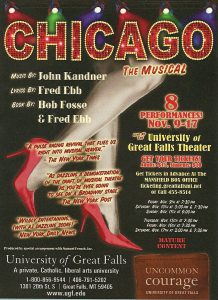 The University of Great Falls Performing Arts just wrapped their final performance of Chicago, The Musical. I was lucky to attend the performance this past Saturday evening.

A couple of years ago I had been to a Broadway touring production of Chicago at the Great Falls Civic Center and it was amazing. The Civic Center is a large, beautiful theater with about 1,600 comfy seats. I wasn’t sure what to expect at the University of Great Falls’ theater. It’s small, and I assume their budget isn’t large.

Jeez, was I ever amazed! If I had been to an earlier performance I probably would have bought a ticket for a second one.

Local university students and one gal whose husband is stationed at Malmstrom AFB in Great Falls literally performed to the highest degree. Vocals were clear and audible, and acting was great. The performer who was not a student has had a lot of acting experience in New York and, although she brought a very high level of professionalism to this show, I felt the students’ acting abilities were also top notch.

Prices are reasonable ($12/adults) and the intimate-sized theater is just right to make you feel part of the production.

Mark your calendar for future performances!