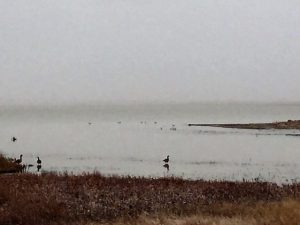 We’ve had an incredibly mild winter, and I’m not complaining about that, but I also realize what it does to our wildlife and vegetation. And, there’s that little issue of moisture too.

I woke up an hour earlier than usual so I could be on the road and at Freezout by sunrise. I checked the forecast before I left my house and it didn’t look great – major cloud cover, 80% chance of rain. But, sometimes that changes and things clear off. I was ready – cameras and warm jacket packed, coffee in my go-cup, and a banana.

It was still dark so I was taking the attitude of an optimist – things could get much better when the sun comes up (a small quote from the musical Annie!). As I drove north on US Hwy 89 nothing changed although it wasn’t bright enough yet to tell if the clouds were going to part.

My entire take on the day was – a cloudy and crisp weather day out birdwatching is better than no day at all out of the office! 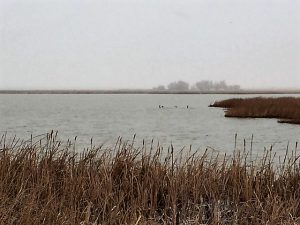 I did see quite a few birders, many with out of area license plates, so I hope they had also been able to birdwatch on some clear days. The entire Wildlife Management Area was peaceful and serene and I just let that shape my take on the outing.

My favorite photo of the day had an incredibly foggy background, a few birds swimming on one of the ponds and you could see a silhouette of several trees. So pretty!

I’m heading in the same direction in a few days for a meeting in Choteau and I just may leave a couple hours early and take the tour route at Freezout.