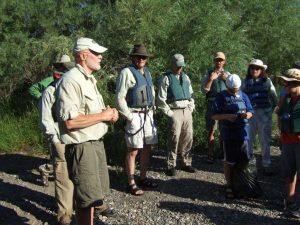 I was up early today, backpack, sunscreen and camera packed, in time to be across town for a 7am departure to float the Missouri River.

There were about 35 in our group – kids aged 9 – 12 who had written an essay and entered a contest sponsored by National Geographic. Their chaperones, mostly parents, also joined us.

The contest is titled the Hands on Exploration project and winners were treated to a trip to explore an area. This year the trip’s location was Central Montana and Northwest Montana. And, this is the first year the trip has been cited in the United States.

All in all, we were feeling very proud and eager to show off Central Montana.

Most of the group arrived yesterday and they toured the C. M. Russell Museum in Great Falls, then went back to their hotel and relaxed for awhile.

Kids are taking notes and blogging about what they experience. 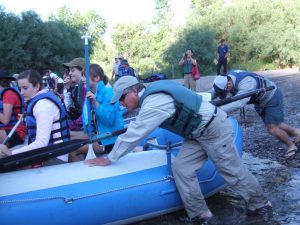 Today’s activities started on the bus heading southwest of Great Falls to our launch site on the Missouri River. Most of the kids had their eyes focused on the landscape, looking for wildlife. The first sighting was by a young boy who saw two foxes, then we saw mule deer and pronghorn (antelope).

When we arrived at Mid Cannon launch site about 45 minutes from Great Falls, we donned life vests and listened to a river safety talk.

We were rafting with Montana River Outfitters and their able guides launched each raft. Yes, we felt pampered as we merely sat in the raft and they did all the work!

We floated from Mid Cannon to the Prewitt Creek take-out, near the Missouri River Inn.

Lunch was under the shaded canopy at the Missouri River Inn and was catered by the restaurant.

Our wildlife sightings on the river included a mink, about a half dozen bald eagles, an occasional rising trout and several species of songbirds. 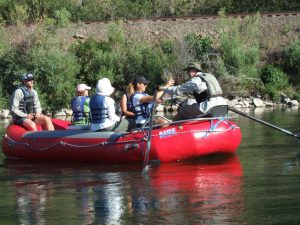 It would have been a great day with just rafting but our wildlife sightings made it even better.

Temps were warm today, about 93 degrees in Great Falls so we definitely enjoyed climbing in to an air conditioned motorcoach at the end of our river float.

It was an awesome day!