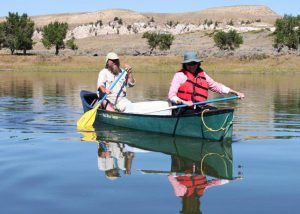 What a great time of year to float the Missouri River!

I usually start thinking about paddling the Mighty Mo in June and it took me over three months to get on the river this year. I have to say, my September canoe trip was the best ever.

We launched at Coal Banks Landing one mile from the small town of Virgelle, Montana. There were three or four other vehicles in the parking lot but it still looked pretty empty.

The campground hosts were there to greet us – I think they were lonesome!

A river permit isn’t required on the Upper Missouri but they do like you to register. First of all, the Bureau of Land Management can have an idea how of many river users they get and, it can also be a safety issue if something were to go wrong on your river trip.

Our morning started out crisp and cool – typical fall weather.

I had a lightweight fleece jacket over my shirt and I was just comfy. After an hour of paddling the sun was a bit stronger, I had gotten some exercise, and the fleece came off. 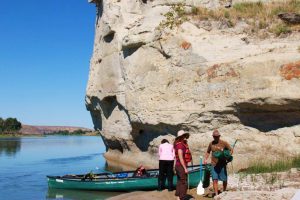 We had six people in our group in three canoes. Half of us had been on this stretch of the Missouri River before and the other three were first-timers in this area.

It is so enjoyable to listen to comments of people as they see and experience the Upper Missouri River the first time.

Our day was quiet – we saw no other people on the river. That, in itself, is pretty amazing!

Well, it wasn’t totally quiet – we heard some deer splashing while they were climbing out of the river after getting a drink. We heard Canada geese honking overhead. We heard a nice variety of song birds. I guess you could almost say it was noisy!

Most people wanting to float the Upper Missouri River on their Montana vacation want to see the White Cliffs area. Stephen Ambrose noted in his book Undaunted Courage that this stretch of the river is largely unchanged from the time the Lewis & Clark expedition traveled up the river. There are cattle instead of bison and an occasional fence line but other than that, I suspect the area has not changed unless weather has eroded the sandstone river cliffs.

We stopped at a small cove called Little Sandy. A creek flows through a slot canyon in to the Missouri River here and it’s a perfect lunch stop. 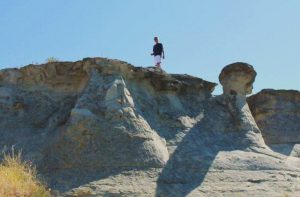 As we ate lunch we looked at our backdrop – sandstone cliffs forming hoodoo-like clusters and a few scattered cottonwood trees. Some of our group opted to climb to the top of the hoodoos, others watched the lazy river roll by.

It was – one perfect day!