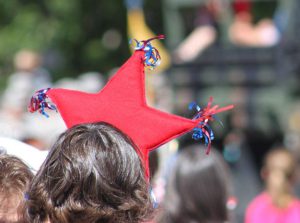 So many Fourth of July celebrations – hard to choose which ones to attend!

I did get to the parade in Great Falls this morning. There is a large military presence in Great Falls with Malmstrom Air Force Base and the Montana Air National Guard (there are others but these are the largest ones) so we always have a very patriotic theme.

As floats and groups comprised of military came by, the crowd shouted their “thanks”, applauded and waved flags.

Local firemen walked through the parade watchers with buckets and asked for donations to cover the expense of tonight’s fireworks display at West Bank Park.

Some people brought chairs, some hoisted little tykes on their shoulders to see the parade better and other kids scrambled for free candy gently tossed to those watching the parade.

My favorite photo is the lady with a star shaped hat on, complete with red, white and blue streamers on the points. 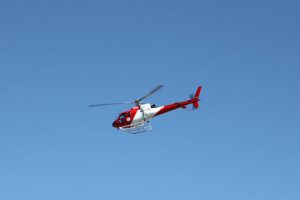 I’m not sure I have enough confidence to wear something like that but it sure looked good on her.

Other compliments to the parade – MT Air National Guard jets flying over the parade route and also a red and white helicopter, courtesy of Benefis Medical Systems Mercy Flight.

Enjoy a safe Fourth of July and, to our Canadian friends, happy Canada Day a few days late.