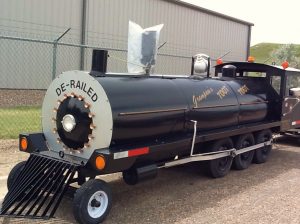 I was in Shelby for a meeting yesterday and took some time to explore the town after the meeting.

Shelby bills itself as the “Crossroads” – Interstate 15 runs north and south and US Hwy 2 travels east-west and both heavily traveled routes intersect here. They also have Amtrak passenger rail service which pretty much parallels Hwy 2.

We met at the new meeting room at Comfort Inn & Suites. When we left there we only had to go about 4 or 5 blocks to get to the Marias Museum Annex. I’ve been to the Marias Museum before (across the street in a former residence) but yesterday we just had time to see the annex.

New displays outside the annex captured my attention first.

A local craftsman, designer and self-taught engineer named Harry Benjamin has built two little trains and placed them beside the museum annex buildings. They are very cute and I like the “derailed” title. 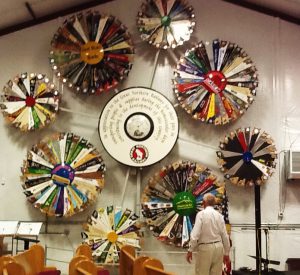 We also took some time to look at the “saw blade” clocks inside the museum annex that Mr. Benjamin has also built. You could watch and be fascinated by these moving clocks for a long time.

The clocks are actually a local fundraiser where different businesses have adopted or sponsored a saw blade. Some just have their logos on them but some chose to have a design done that is pertinent to their business. You really have to see this clock display to appreciate the beauty and the engineering behind it.

The future site of Champion’s Park was next on our agenda. It is just a couple blocks south of the museum annex. Land has been donated and concrete has been poured to begin this project.

The boxing champions – Dempsey and Gibbons fought a heavyweight bout in Shelby July 3, 1923. Park plans call for interpretive panels and a statue to be placed on the concrete pad.

Veteran’s Memorial is just a few blocks from Champion’s Park. Tributes are given to each branch of the US Armed Forces and bricks can be purchased to memorialize someone who has served. A large US flag waves proudly in the background with several smaller flags below it. 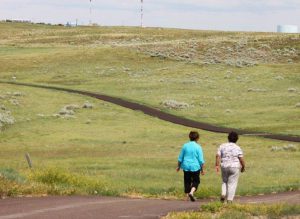 We drove about a mile or so southwest of Shelby to view part of the Road Runner Recreational Trail. This paved 5 mile trail would be a great workout – lots of rolling terrain. We thought about walking the trail – in fact we anticipated some calorie burn and had a milkshake at the Prairie Peddler in advance! We ran short of time for a walk though.

It was so pretty there – the fields still have green grass and that provided a nice contrast to the dark asphalt. A race on the trail is coming – the Great Escape Race, sponsored by the nearby prison.

My visit to Shelby could have been longer. I need to plan more time the next time I’m headed that way.