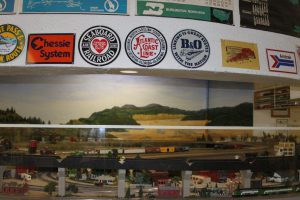 No, I’m not going “hobo” here but if you are a rail fan or railroad history buff, you’ll be thrilled with Havre’s Railroad Museum.

I wasn’t expecting a Railroad Museum when I first entered the building to buy my ticket for a tour of Havre Beneath The Streets. It was definitely an added bonus and I started taking photos right away.

Frank DeRosa, who was the main person instrumental in restoring Havre Beneath The Streets, also developed the Railroad Museum.

The display in the first photo here is front and center when you enter the building and it has moving model trains circling the inside perimeter. Trains cross over several overpasses, some trestles and they also change tracks. I was fascinated!

The city of Havre was founded when James Hill brought the railroad through the area from his home state of Minnesota. Havre has always been a railroad town and it remains that today. The names have changed – it is no longer the Great Northern Railway but Burlington Northern Santa Fe has a huge presence in Havre and Amtrak’s Empire Builder still rolls through Havre and makes a service stop there. 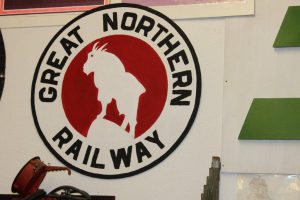 A statue of James Hill stands proudly near the Amtrak station to greet passengers.

Havre also has a railroad club comprised mostly of retired railroad workers. They gather once a month to take their model trains out of boxes and run them in a room in the basement of the Railroad Museum. You can watch the smiles on these guys (one gal too) as they run the trains!

Even if you aren’t interested in rail history, a stop at the Railroad Museum in Havre will take you back to childhood days and I bet you’ll be as enchanted as I was.