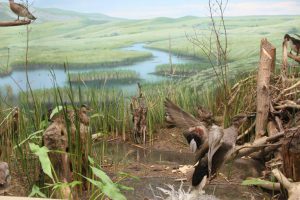 Plans began almost 20 years ago and fundraising started then too. It was a big dream for a small town.

The building housing the Wildlife Museum is a former movie theater. And yes, I spent many a Saturday afternoon going to the movies there!

It became home to a video rental business after the theater closed. Then, the Wildlife Museum organizers gave it new life as a museum.

I spent some time getting a glimpse at the Wildlife Museum last week. Even though I had been there less than a year ago, things have changed – more exhibits are added as budget and time allow.

Looking to the future, there is even an “adoption” case where animals are waiting for a sponsor to finish their prep into an exhibit. 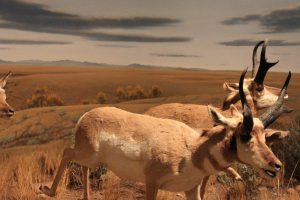 I have several favorite exhibits at the Wildlife Museum – the wetlands display is done so well. The first photo here shows the water splashing as the duck takes off so it feels quite real.

There is a buffalo display showing how Plains Indian tribes harvested this essential animal before the introduction of firearms and horses to their culture.

Since I’ve seen lots of antelope on the Montana plains recently, I thought this display would be good to use here. Our wildlife experts say there aren’t as many antelope this year but, I keep seeing fairly large herds of them.

When planning a visit to Montana it’s easy to get your schedule filled. I recommend allowing time to visit Chinook’s Wildlife Museum.