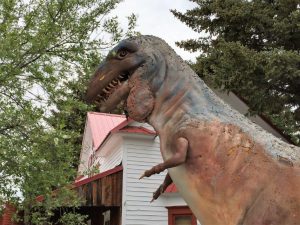 Montana has had some incredibly significant discoveries of fossils, most noteworthy are the dinosaur bones. Fourteen areas have joined together to form the Montana Dinosaur Trail coverning eastern, central and southwest Montana.

This past weekend I met with the members of the Montana Dinosaur Trail and I’d like to share some information about a few of them.

If you are traveling on US Hwy 2 from the North Dakota border and traveling west you could stop at six different museums and interpretive centers with amazing dinosaur displays.

Some of the facilities are focused entirely on dinosaurs – others are county museums that have had significant dinosaur “finds” in their area. Following are a few of the facilities you’ll find in Central Montana.

If you were at the Blaine County Museum in Chinook you would see a Gorgosaurus, an Ankylosaurus and remnants of giant marine reptiles. In the lower level of the museum there is a Look, Touch and Wonder Room – fun for kids and adults alike. While not dinosaur or fossil related, the Blaine County Museum has incredible displays about Chief Joseph and the Nez Perce battle that occurred south of the town. 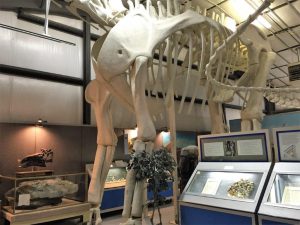 Havre’s H. Earl Clack Museum is located in the Holiday Village Shopping Mall adjacent to US Hwy 2. Most of their focus is on area history but that includes a Lambeosaur skull (think…duckbill dino) and 75 million year old dinosaur eggs and embryos. Oh yeah, that’s old!

Behind the building where the Clack museum is housed is Wahkpa Chu’gn, an archeology lover’s paradise. This buffalo jump is an education in itself where you can see layers of earth that tell the history of the area.

The Depot Museum in Rudyard, further west on US Hwy 2, has several buildings with one building devoted to dinosaurs. A fully articulated Gryposaurus is the feature display (named because Rudyard claims to have 596 nice people and old ole “sorehead”). This museum is an affiliate of the noted Museum of the Rockies in Bozeman, Montana.

Just south of the junction of US Hwy 2 and 89 is the little town of Bynum (pop 33). If you have ever wanted to get “in the dirt” to do dinosaur research, this is your place! 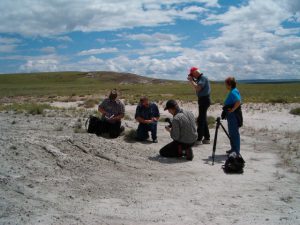 The first baby dinosaur bones found in North America were found near the Bynum/Choteau area on the Rocky Mountain Front and they are displayed at Two Medicine Dinosaur Center in Bynum.

Thirteen miles south of Bynum on US Hwy 89 is Choteau and the Old Trail Museum. The Old Trail has a Maiasaura (that translates to “good mother lizard” and it is the name of our official Montana dinosaur).

At the Old Trail Museum you’ll also learn some geologic information about the Rocky Mountain Front where these dinosaur fossils have been found. Native American history and area history are both displayed and interpreted inside the museum. Small  buildings adjacent to the main museum round out the well designed displays at the Old Trail.

The next stop on the dinosaur trail in Central Montana takes you southeast to Harlowton, Montana. Located at the junction of Hwys 12 and 191, the Upper Musselshell Museum displays a replica cast of the 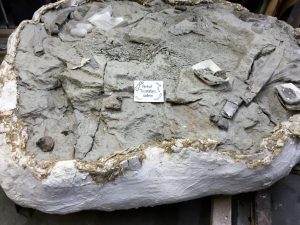 I have personally visited every one of the museums mentioned above. Each time I return to the museums I learn something new. In another year or so I plan to start taking my grandkids and sharing my dino experiences with them.

Find more information on all fourteen facilities on the Montana Dinosaur Trail and enjoy this great learning experience.