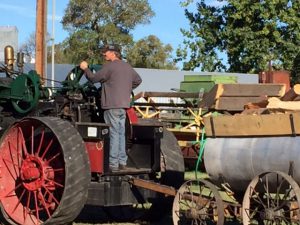 A threshing bee has been on my radar for several years and I finally went to one.

The Teton Antique Steam and Gas Threshing Association has been in existence since 1984 and they do an annual threshing bee each September in Choteau, Montana.

I decided to go early – and believe me – this event opens at 7am so I left Great Falls for the 52 mile drive a little after 6am. Ugh! The best thing to say is that the sunrise was beautiful and the soft morning light made my scenic photos look pretty good.

My first stop in Choteau wasn’t the threshing bee, it was Bylar’s Bakery. Oh yum! I was early but there were people ahead of me. Decisions, decisions! From maple bars to raspberry filled eclairs to toffee chip cookies, everything looked yummy. I was having my kids over for dinner later so I chose the 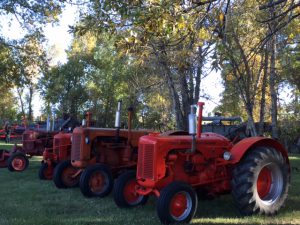 cookies. And, they were a huge hit that night.

Back to the threshing bee!

After I parked near Choteau’s Pavilion, I could hear the steam and gas powered engines starting. A group of folks were standing around one tractor that was loudly and sporadically chugging.

Many steam and gas powered tractors (actually all types of equipment) were lined up. It was fun to see the old time logos and compare that to today’s equipment companies that have all seen several mergers.

Breakfast was being served and I saw huge plates of biscuits and gravy (that’s not my favorite) but I had already been to the bakery!

Craft items were available – the most curious-looking bird houses I have ever seen. They were made out of old cowboy boots and had a roof over them. If I had a place to put one of them I would have purchased it. 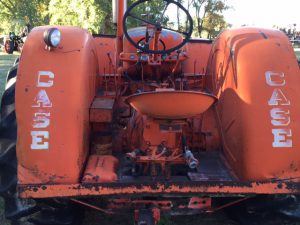 By time I left the threshing bee there were plenty of steam and gas powered engines fired up – some were belching smoke, others were steadily chugging along.

This is an educational event and I saw many families enjoying a vanishing way of life – hard work but interesting to see how harvest was done years ago.

If you get a chance, take in a threshing bee and get a glimpse of life on the farm as it used to be.