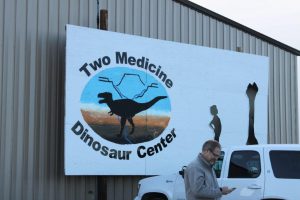 The other day when I was heading north on US Hwy 89 I stopped in Bynum, MT (north of Choteau if you don’t have your map handy!).

Two Medicine Dinosaur Center is the most obvious business there – a very large steel building with a big logo featuring a dinosaur gracing the front of the building. It’s one of those “can’t miss” attractions as you drive on this highway.

I’ve been to Two Medicine quite a few times but I heard they were doing some construction after winning a grant and I was curious to see what they were doing. Most of the displays had been moved for safekeeping during construction.

I was able to go up to their new “mezzanine level” and look out over “Halli” which is the world’s largest replica of a Seismosaurus halli. It pretty much stretches the entire length of this building, then bends it’s head in order to fit.

There are incredibly unique displays at Two Medicine Dinosaur Center. 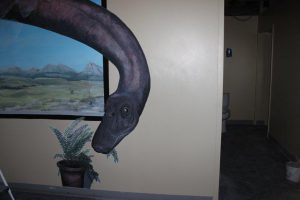 The baby dinosaurs found at what is now called Egg Mountain are displayed here. Dave’s mother Marian Brandvold found these babies many years ago. After this find, paleontologists changed their way of thinking about dinosaurs. This find indicated that dinosaurs did, in fact, mother their young. Our Montana state dinosaur (yes, we have one) is called Maiasaura which translates to “good mother lizard”.

The lobby and gift shop areas are completely remodeled. I liked this wall painting which you see when you enter the front door.

Another fun display is casually called BOB (block of bones). This huge dino find was removed from the field in a plaster jacket and it’s interesting for an untrained but interested paleontologist to see the bones like this.

Two Medicine Dinosaur Center is well-known for their hands-on field digs where visitors can participate. I’ve been lucky to find eggshell just about every time I’ve gone on a dig with them.

As we visited with Dave Trexler at Two Medicine Dinosaur Center he mentioned the book he just published. It is titled Becoming Dinosaurs and I haven’t read it yet but it’s about how we are treating the earth or better yet, how we should treat it so we all don’t go the way of the dinosaur! I think! More on that after I read it.

When you drive through Bynum you also see a mural on the side of a building named The Rock Shop. Dave’s mother and father-in-law own this business. It’s fun to poke around the Rock Shop – many, many treasures and I’ve bought jewelry here before.

End of my story – don’t drive through this little town without stopping. You’ll miss a lot.