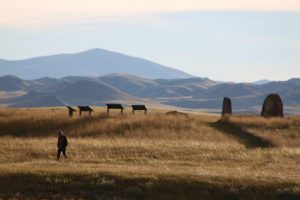 This past Saturday, October 5, was the 136th anniversary of the surrender of Chief Joseph’s Nez Perce people at Bear Paw Battlefield south of Chinook, MT.

Every year several members from the Nez Perce tribe, National Park Service, and some nearby coordinators at Fort Belknap Indian Reservation organize a ceremony at the battlefield on the Saturday nearest to the October 5 date.

I wasn’t able to attend that ceremony this year but I was able to get to the battlefield later that afternoon.

The ceremonies that I have attended have been very poignant.

One year that I attended, the weather even held true to the actual weather experienced in 1877 – a bone-chilling wind, a light dusting of snow and no sunshine.

This year the weather was beautiful and, since I was there later in the day, the light for photography was great. 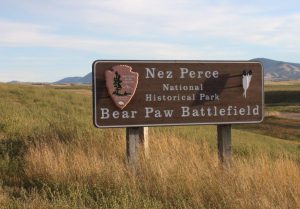 My recommendation for anyone visiting Bear Paw Battlefield is to first stop at the Blaine County Museum in Chinook. There are several artifacts there and also a very nice video titled “Forty Miles From Freedom”. The Nez Perce were fleeing the US Cavalry and trying to get to Canada, forty miles north of the battlefield.

Bear Paw Battlefield is 16 miles south of US Hwy 2 on a paved county road. If you are on the south side of Chinook already, you’ll see a sign that says 15 miles to the battlefield.

As you drive south of town you cross the Milk River and the terrain begins to change a bit. The ground is more rolling and the Bear Paw Mountains in the distance become more prominent. Along the paved road you’ll see farms and ranches and a sign marking the Nez Perce Trail. Most of the land along the route is private. 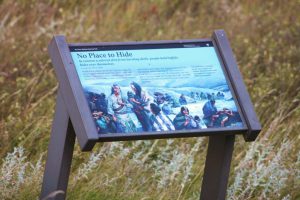 I probably get to the battlefield once a year and each time I go I see some subtle, small improvements. There is very little development there but a trail will take you through the battlefield and past markers where Nez Perce were killed during the battle. Colored interpretive panels have been placed in a few places on the battlefield and a small wooden foot bridge helps you cross a small drainage.

There is a picnic shelter close to the graveled parking area, a self-guided trail and primitive toilets.

The Nez Perce War of 1877 lasted four months. Bear Paw Battlefield is the site where that siege ended. It’s well worth a visit.