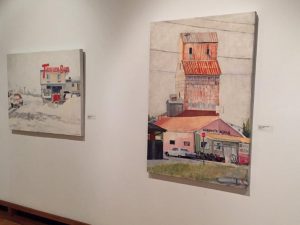 I grew up in Chinook, Montana on US Hwy 2. About midway between Chinook and Harlem is the tiny town of Zurich.

Historians tell me Zurich was named by a railroad conductor traveling this route. According to the story, he spun a globe and pointed at Zurich, Switzerland and named the Montana location after it.

We pronounce Zurich, Montana with a “ch”, not a “k” sound and I suspect the terrain is vastly different between the two towns. You’ll see irrigated cropland in the valley area known as Zurich, Montana and mountain peaks in Zurich, Switzerland.

Montana’s Zurich has almost faded away but one part still in existence happens to be strongest in my memory.

Zurich Park, just a couple miles out of town has a great playground for children, an enclosed building for all types of gatherings and plenty of camping and 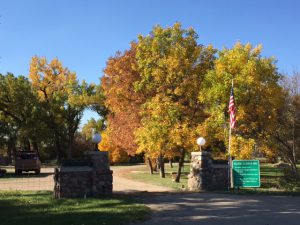 I stopped at the park last week and I can still (in my memories) hear square dances being called, the voices of my 4-H leaders, the playground swings squeaking, and friends and family playing in the area.

Wow – what a trek down memory lane for me!

The park was quiet the day I was there. I visited with one of the caretakers who lives on site and I saw one camper.

I also saw several antelope on the way to the park and a pheasant while driving back.

I was pleased to see that the park was in tip-top shape. 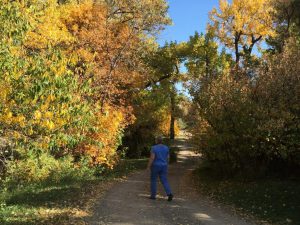 Fall foliage was truly putting on a show and I chastised myself for not allowing more time to visit this hidden gem. As we walked around the area I took several photos – memories for me that I can look at in years to come.

Even though the town of Zurich is slowly fading, Zurich Park is still frequently used today for a variety of gatherings.

Next time, I’ll plan on taking my grandkids along and help create some small town memories for them.