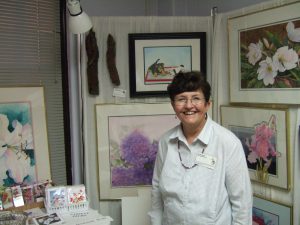 The first Friday of every month features a free-to-the-public art walk in Great Falls. I’m not sure how many years it has been going on (I’m going to guess about 5) but I do remember the very first one. There had been quite a bit of promotion for it and then it snowed, and snowed, and snowed. My adult children and I decided to go to show support, not knowing what to expect. I think many people had the same idea and the turnout was very good.

The first show we went to was in an old repurposed building, formerly a hospital, now boasting offices and the studios for many artists in the Four West Art League. Doors to the studios were wide open and artists eagerly anticipated comments about their work.

The art walk has expanded to include all of Great Falls. In addition to the Four West Art League, many downtown art galleries and artists participate, Paris Gibson Square Museum of Art is open, and several other galleries and studios around Great Falls open their doors. In today’s listing of events I counted eleven different art locations that were open to the public. 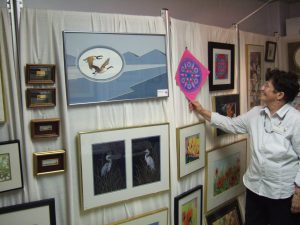 Tonight I went to the Four West Art League show and visited with featured artist Darlene Sanford. Darlene is a long time artist and her work is quite varied.

I absolutely adore her beautiful floral watercolors and she also has begun woodcarving. She had a steady stream of friends and supporters coming to her room but I managed to get her to pose for a couple of photos with her work.

I visited all of the studios at Four West Art League (they are on the fourth floor of the former hospital building), saw longtime friends and had some delectable munchies provided by the artists.

A good time! Mark your calendar for the next first Friday of November and you can enjoy some fine artwork.

The Great Falls Historic Trolley offers free shuttles between some locations and there is no charge to visit the studios and galleries. It’s a fun, educational and budget-friendly event.