I know spring is here when Great Falls Park and Recreation announces their annual release of the ducks, geese and swans from the “Honker Hilton” to the pond at Gibson Park. Last Friday afternoon a good sized crowd gathered around one end of the pond to wait for the trucks and trailers loaded with waterfowl to appear. I was a running a bit behind schedule – I arrived before the city vehicles but I didn’t … Read more

For a Saturday morning, I was up and moving fairly early. My electrical power went off around 4:45am, at least that’s when I noticed the clock blinking. I didn’t get up then but it seemed like I looked at the clock almost 30 times between then and 6:15. MT Fish, Wildlife & Parks had partnered with the local Upper Missouri Breaks Audubon Club for an escorted birdwatching event at Giant Springs State Park. I always … Read more

What a grand celebration idea for Montana Fish, Wildlife & Parks for their 75th anniversary. Tonight they held a concert at Giant Springs State Park on the east edge of Great Falls. I had seen the information in the newspaper and I really like to support different events like this. But, I was lucky to have overnight family guests all weekend and I had a ton of things I thought I needed to get done before … Read more

Today was the day domestic waterfowl were released into Gibson Park Pond in Great Falls. It’s a big deal – and I get just as excited as some of the little kids! Each fall the domestic waterfowl are rounded up by Great Falls Park & Recreation employees and taken to indoor quarters dubbed the Honker Hilton. Pretty nice digs for waterfowl! The swans and ducks have their wings clipped so they don’t migrate or fly long … Read more

Spring snow goose migration is underway and Central Montana has amazing opportunities to see huge quantities of birds – right now! I drove up to Freezout Lake Wildlife Management Area between Fairfield and Choteau late yesterday afternoon. It’s an odd spelling on the WMA name, but that’s another story! From Great Falls to Fairfield is about a 35 minute drive for me and well worth the time. Last spring I also went up to see … Read more 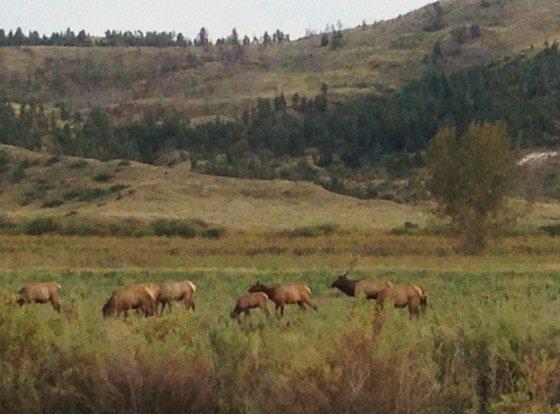 The first time I ever went to the Slippery Ann elk viewing area was with a public tour organized by the Charles M. Russell Wildlife Refuge folks from their Lewistown headquarters. We packed sandwiches and snacks for the evening tour, climbed on a bus and settled in. I’ve been lucky to go again on my own but I learned a lot about the wildlife refuge on the tour. The elk usually start bugling mid September and … Read more

Wow, for once I had my camera handy as I was driving on a country road.  And I had some spare time AND I saw some wildlife. Two sandhill cranes were walking along in a stubble field, completely oblivious to me. I stopped my car, rolled the window down and took a photo. Not bad but I decided I wanted to be a bit closer. I changed to a more powerful lens ( the only other one … Read more

Freezout Lake (almost looks like it is spelled wrong but that’s correct!) between Fairfield (4 miles) and Choteau (7 miles) is the site of two major birding “events” – spring and fall snowgoose migrations. Tundra swans also are part of the two migrations. Freezout Lake straddles US Hwy 89 and the lake is really a series of interconnecting ponds, ditches and dikes built to control water levels. With consistent water, marsh-dwelling birds, waterfowl and many other species make … Read more

I was out for an early morning drive recently, trying to capture a beautiful sunrise. I was successful at that and, as I was driving back to Great Falls along the Missouri River, I saw a couple of guys out waterfowl hunting. The first hunter I saw was a young guy wading in the chilly waters of the Mighty MO. Brrr! He looked like he was dressed for the weather and the activity though. At first … Read more

I admit, the first time I heard a friend refer to the CBC I was wondering if it was a new television network. Then, realizing her connection and devotion to bird watching, I carefully said hmmm…the CBC, is that something related to birds? Sure enough, CBC stands for the Christmas Bird Count. I’ve learned a lot about it since the first time I heard the letters. Over a century ago, ornithologist Frank Chapman proposed a … Read more